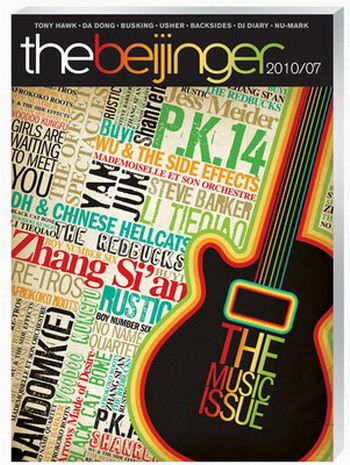 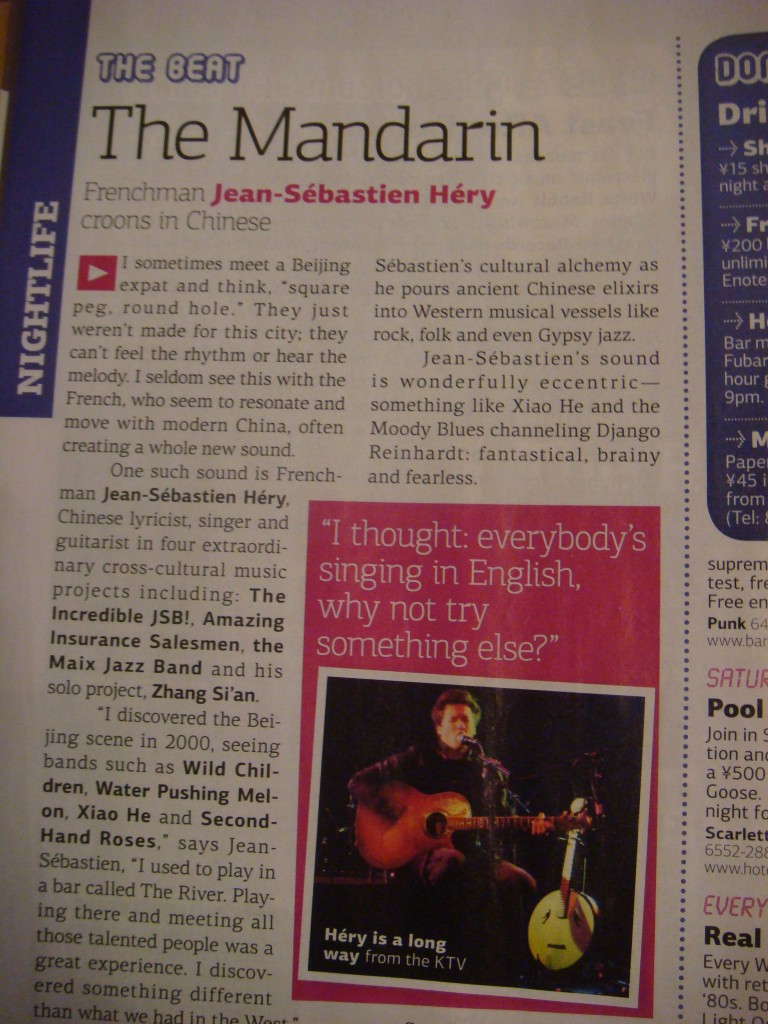 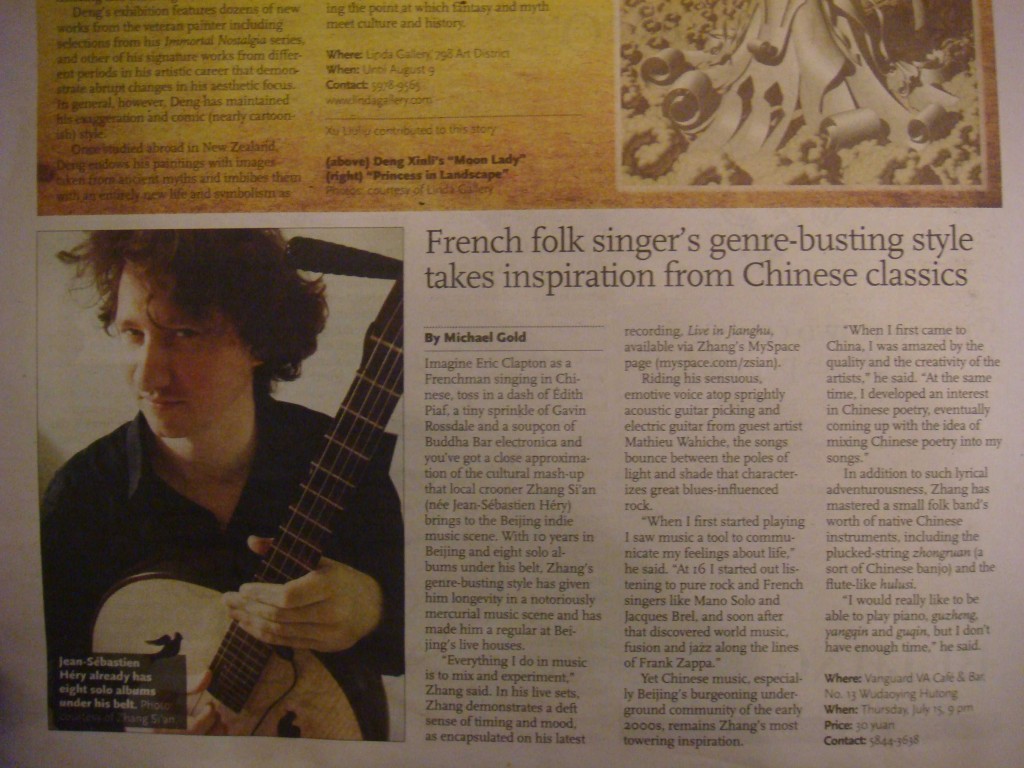 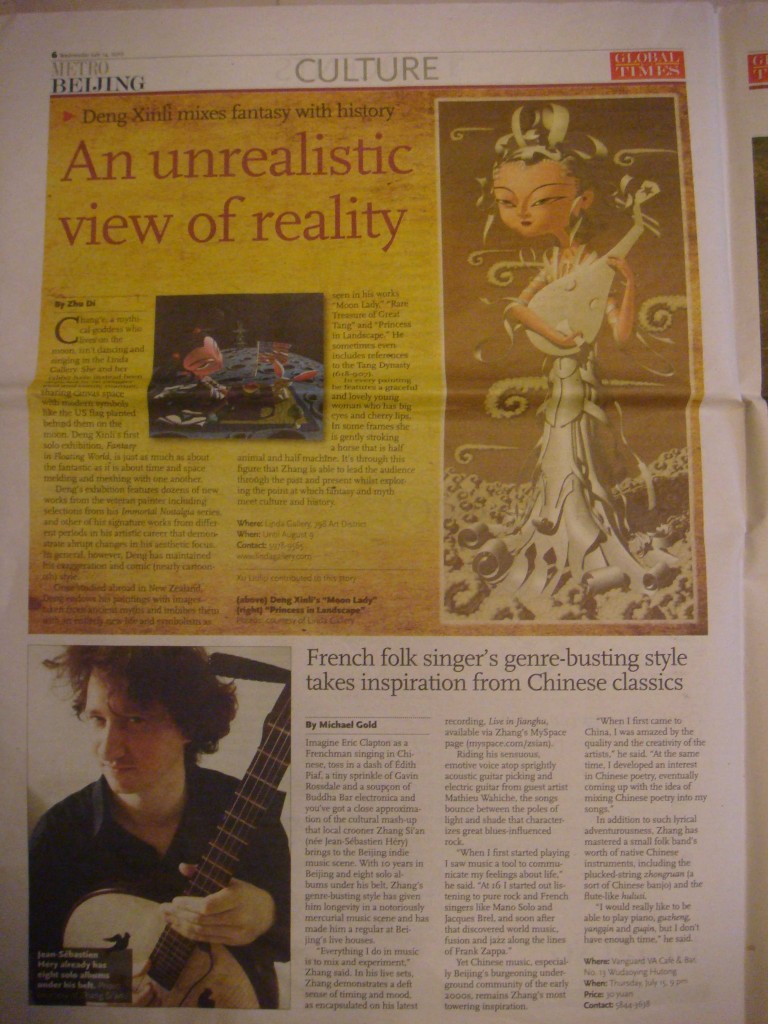 By Beijing Daze in 10 Questions, Beijing 人, Tunes under the moon

I first came across the name Zhang Si’an ( Jean-Sébastien Héry) on a city weekend article that peaked my interest. It was penned by regular contributor, Gary Temple, who knows a thing or two about music in Beijing and he went all out with the praise. Moreover, it all sounded like honest heartfelt opinion, not some embellishment of the truth.

As I had the chance to find out for myself later from his performances andconversations we shared, Gary was spot on! Jean-Sébastien or Zhang Si’an is really a fascinating character with a unique and rare dedication to all things music. He plays performs under 3 different names on a regular basis but is associated to even more bands that that and has 4 records under his belt with more on the way.
He was kind enough to take some time this weekend and answer a few questions!

1- What’s going on in your world? This is your chance to plug your stuff:

2- How did you get into the China scene, singing in Chinese and playing Chinese folk?

It’s in the year 2000, when i first came to China, that i met with most folk and rock musicians of the time, including Wild Children, Second Hand Roses, Xiaohe,Buyi, Cold Blooded Animal, Xie Tian Xiao, Wang Juan, Wan Xiaoli…I got really interested by all that music and decided to write songs in Chinese. Back then, i was studying Chinese in France and was visiting Beijing for two months, i was doing rock in France (Bordeaux), was singing mostly in English, and had never thought music like that existed in China. That first trip to Beijing got me interested in exotic instruments, i bought a Zhongruan (kind of like a chinese banjo), a few flutes, some gongs, and when i came back to France that year i started to record with all those instruments i had bought, looking for ways to explore new sounds. I came back to Beijing for a year in 2001-2002, and played almost every wedneday at a bar called The River, which back then was one of the center of underground music in Beijing. I also started to listen to the Chinese classics of rock music such as Tang Chao, Heyong, Douwei, Zhang Chu, Cui Jian and got influenced by it.

3- What is it with you and adjectives? The Amazing this, the Incredible that…. do you like adjectives or just like long band names?

I think i just like long names that make no sense

4- You said last time that there would be an album soon for The Amazing Insurance Salesman… how is that going?

After looking for a studio to record us for a long time, we finally found the right people to help us do it. I hope we will have something finished around July. We are also looking for a music label to distribute the music in China, Europe, and the US.

5- Where’s the picture you’re using from? the one with the beautiful lady?

Actually i don’t know about that picture. I was looking for a funny way to represent insurances, so i typed “Insurance” in Google and found nothing. I typed “Car Insurance”, and found that picture.

6- I loved your little cooperation with MC Felix, Jidan Chaofan, how did that come about and do you ever play it live?
Thanks for liking “Jidan Chaofan”, i also helped for the music on the former video “Beijing”. The idea of those videos was to make something fun, and it was the first time for me to do rap music, so i got very interested in the project. We decided to create a band Da Bizi, and looked for musicians to help us make the project come true. Unfortunately my other projects were taking me too much time and i decided to let somebody else take my position in the band. We did play “Jidan Chaofan” once, during the Nanluoguxiang festival this year. To see the videos, click on the link below:

7- Word association: write the first word that comes to your mind.

8- Your repertoire has songs in French, English and Chinese. Can you name 1 song in each language that is representative of Beijing for you and tell us why you chose it?

This is not an easy question….I can think of many songs and no songs at all. I have so many different feelings every day about Beijing that i don’t know what describes it best. Mainstream songs as well as underground songs all come to my mind at the same time. In Chinese, songs from Cui Jian like “Yi wu suo you” or “Yi kuai hong bu” that i sometimes sing,”Ni kuaile yu shi wo kuaile” by Wang Fei “Yueliang daibiao wo de xin” from Teresa Teng, any music from Dou Wei, a song called “One night in Beijing” as well, wich singer’s name i don’t remember.
In French, “La vie en rose” (Edith Piaf), “Des armes” (Noir désir), “Dans le port d’Amsterdam” (Jacques Brel), Minor Swing (Django Reinhardt).
In English, “Summertime” (Louis Armstrong), “Shine on you crazy diamond” (Pink Floyd), Paranoïd Androïd (Radiohead) and i guess many more songs….

9- You’ve been around for a few years around the music scene in Beijing/China. How has it changed since you arrived and what artists do you think deserve more recognition than they get?

I think what has changed is the interest of people from the outside to the Chinese music scene. When i first came here, nobody outside of China knew that there was a Chinese music underground, and there were not so many bands, famous or unfamous, coming to tour in China. The big difference now is that it’s becoming normal, as a western band, to tour in China, and so more and more musicians do it, sometimes as part of an Asian tour.
In the year 2000 was the first Midi festival, i saw the second one in 2001, and i saw it this year again, 10 years after. The number of bands has become much bigger, and the styles of music are now all represented, which was not the case before. In general, i consider that it still is too many people outside China who don’t know what’s going on in the music scene here. I also think the authorities should promote that music more, inside and outside the country.

People who deserve more recognition ? As a whole, i’d say the Beijing music scene, in general, deserves more attention from music markets such as America, Japan, and Europe. For folk music, i’d say Dong Zi, Song Yu Zhe, Zhou Yun Peng, Li Dong, Mamuer. On the rock side, Wu and the side effects. On theJazz side, anything Pierre Brahin did and does, including his recordings with Chinese singer Xiaohui. On the electro side, i like what Sulumi does, but he apparently already has a lot of attention.

10 – On the “gourmandise” side of things, what are some of your favorite Chinese restaurants in Beijing?

JSB is a great example of Beijing’s music talent and their willingness to just sit down with fans and other musicians alike around a meal or a drink and I’m extremely thankful for his time and the breadth of his answers! Quite a few names he dropped in terms of influences and songs that everyone should try an check out. It seems like a stretch being a Frenchman singing in Chinese.. kinda like a square peg in a round hole… but with what JSB is doing here, I’d say he’s more like a Square Peg that made his own hole…. a cozy one that is. 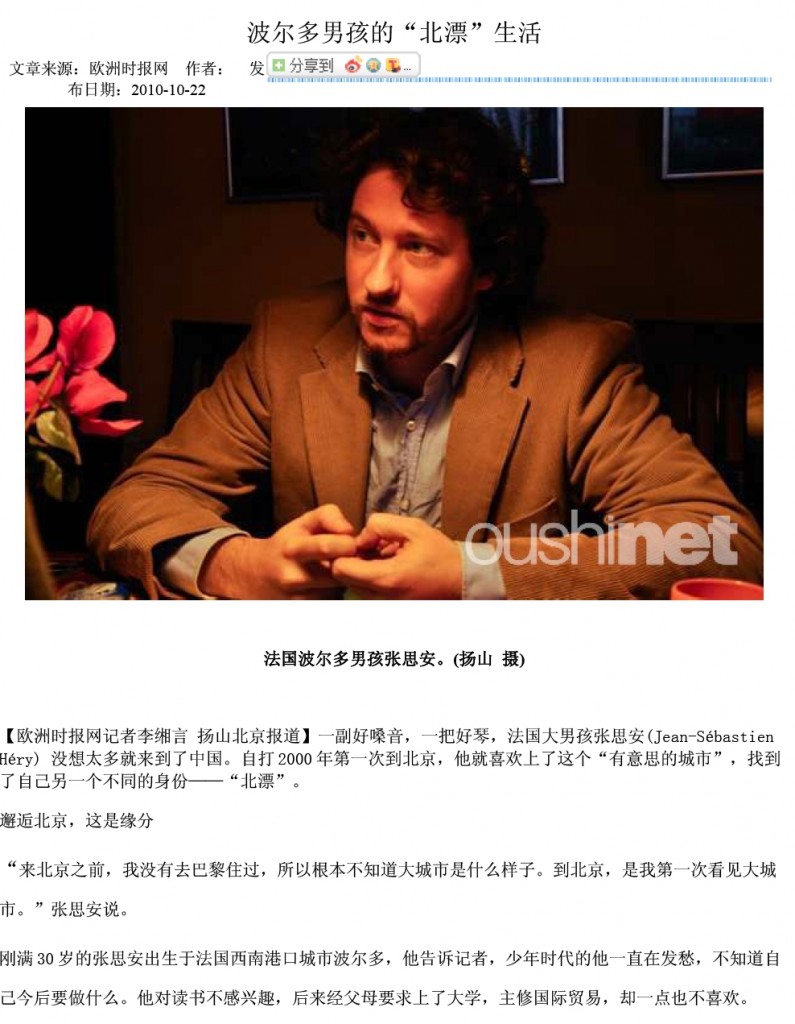 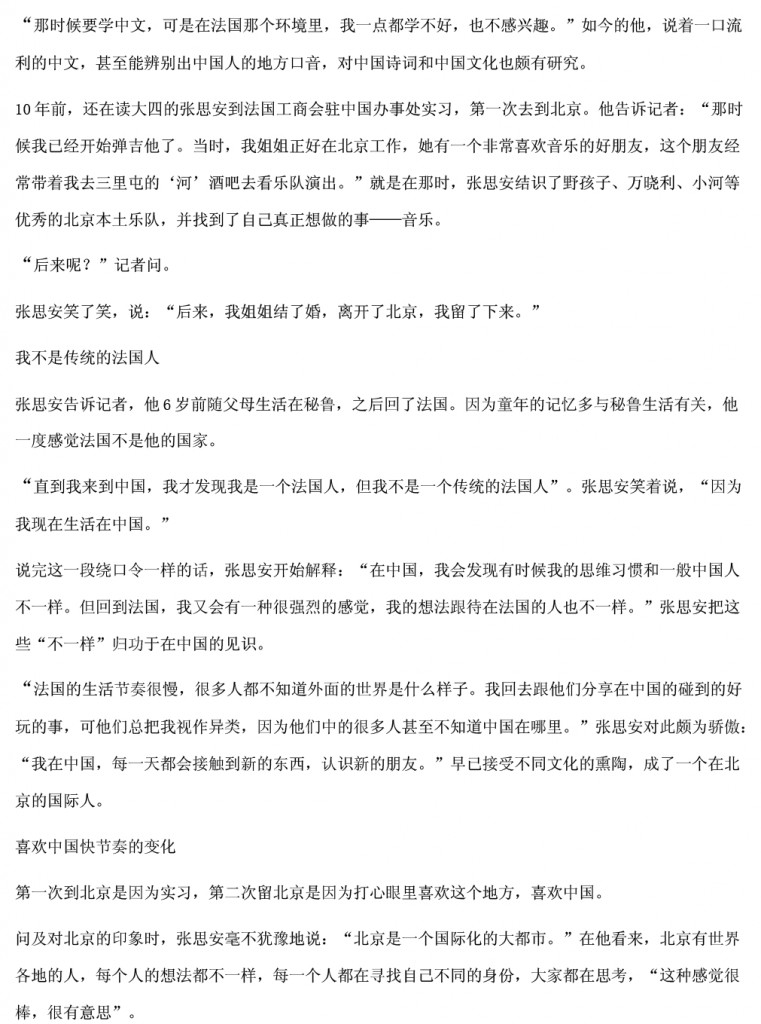 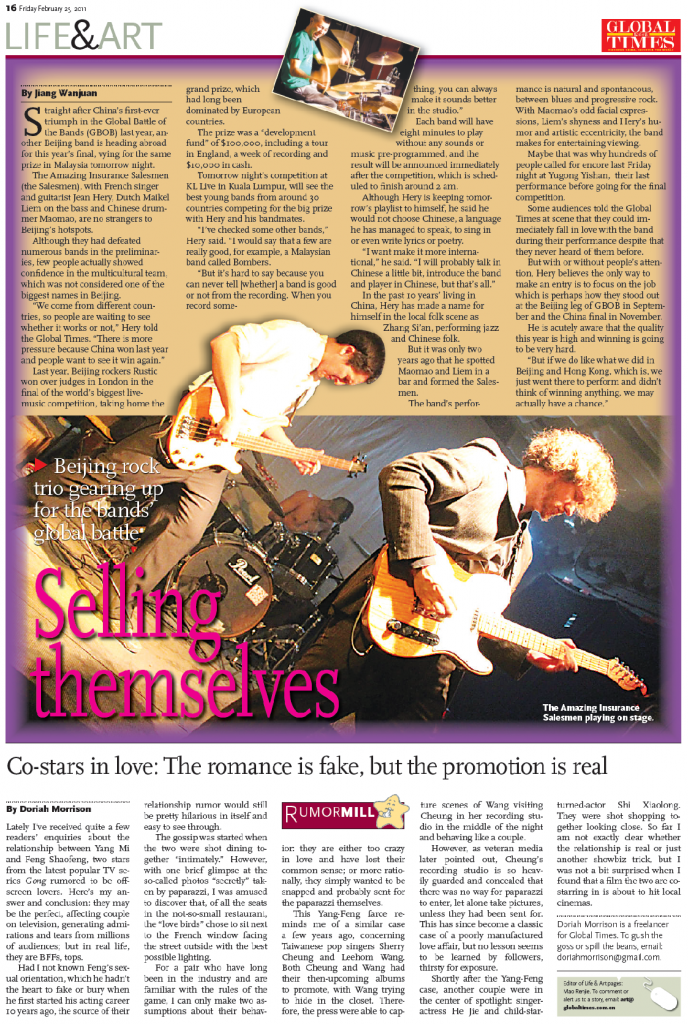 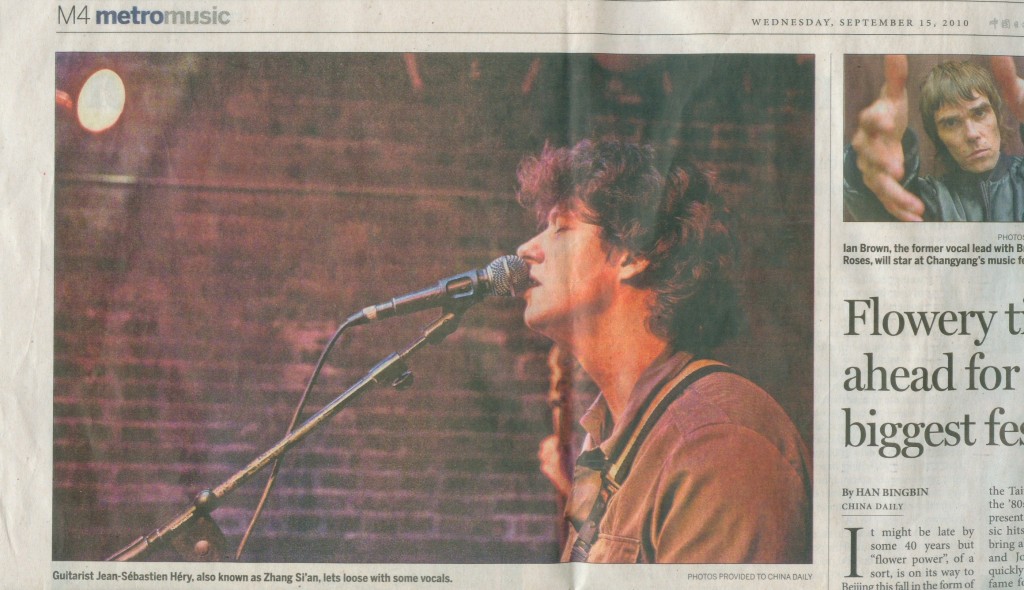 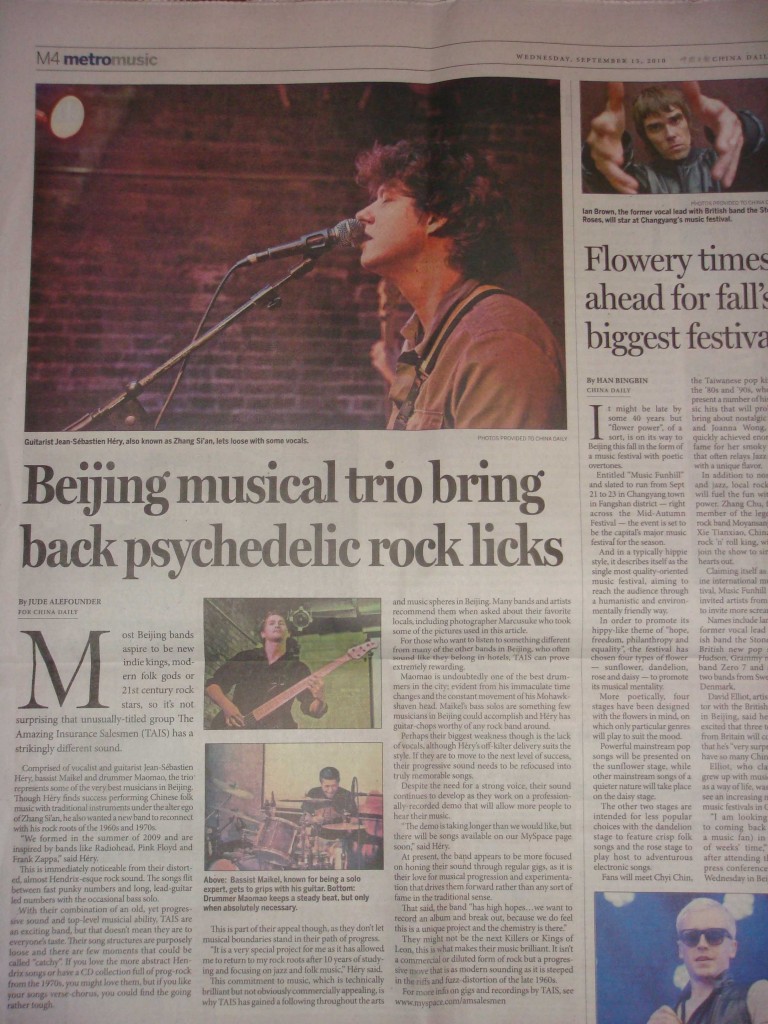 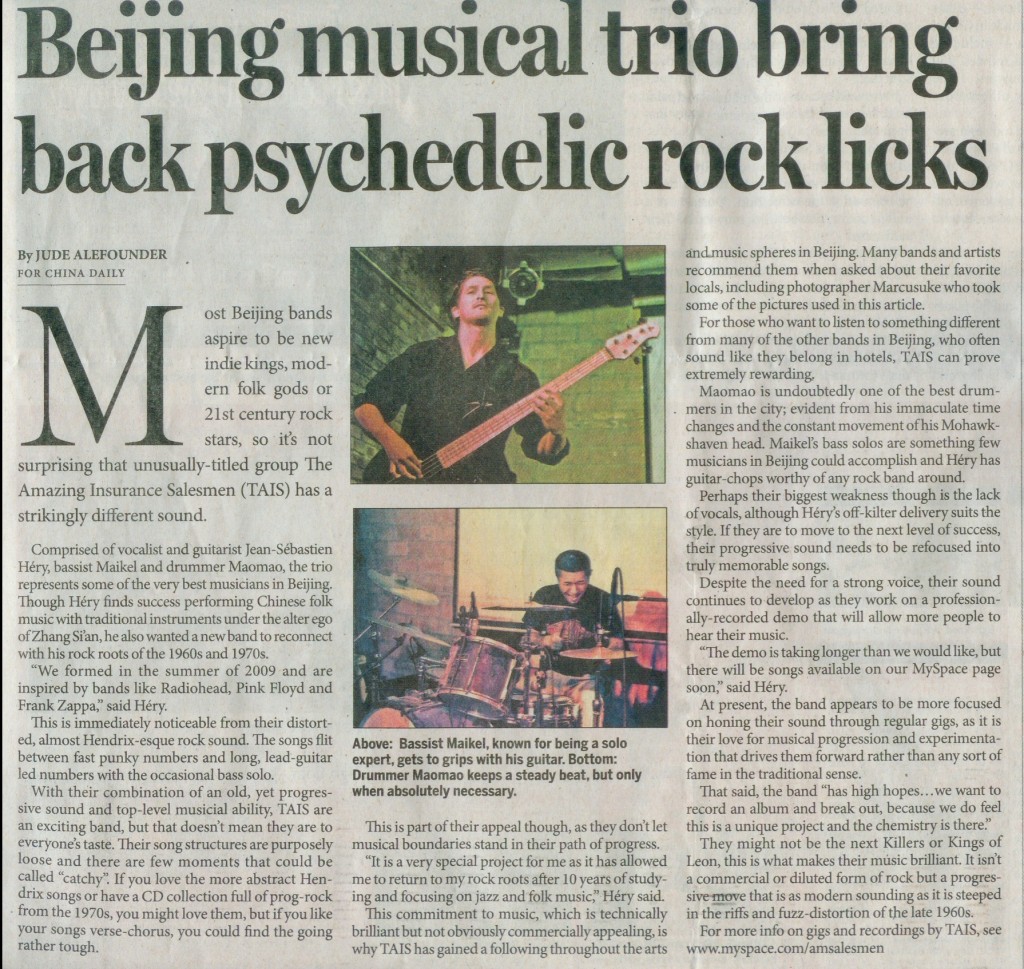 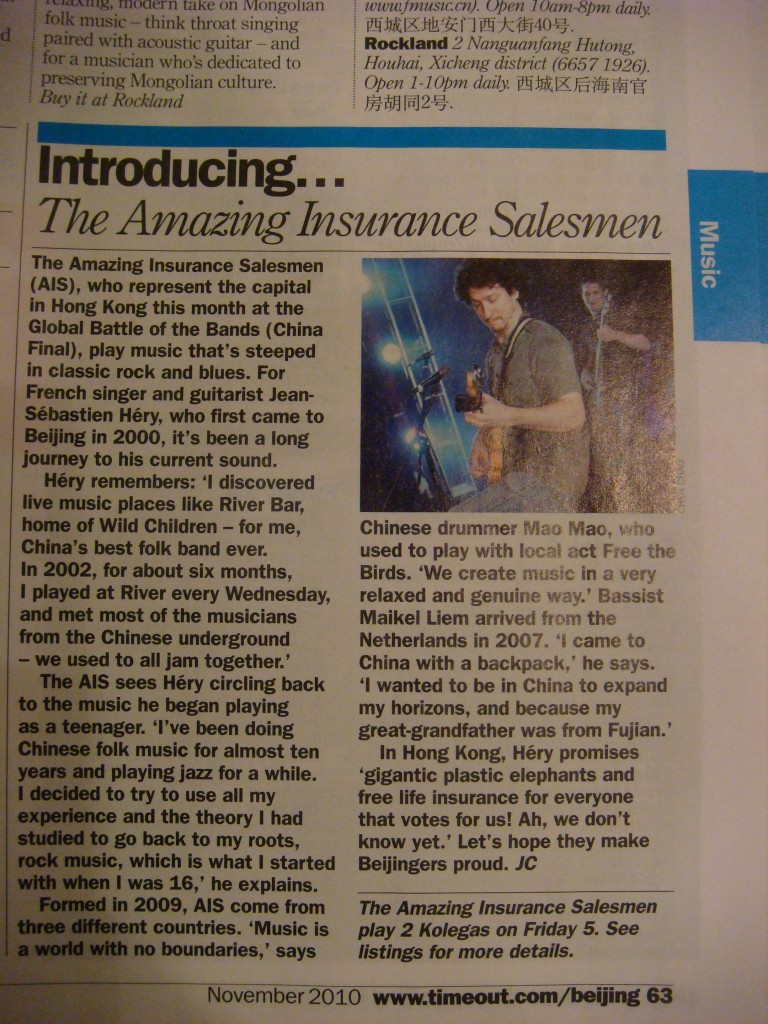 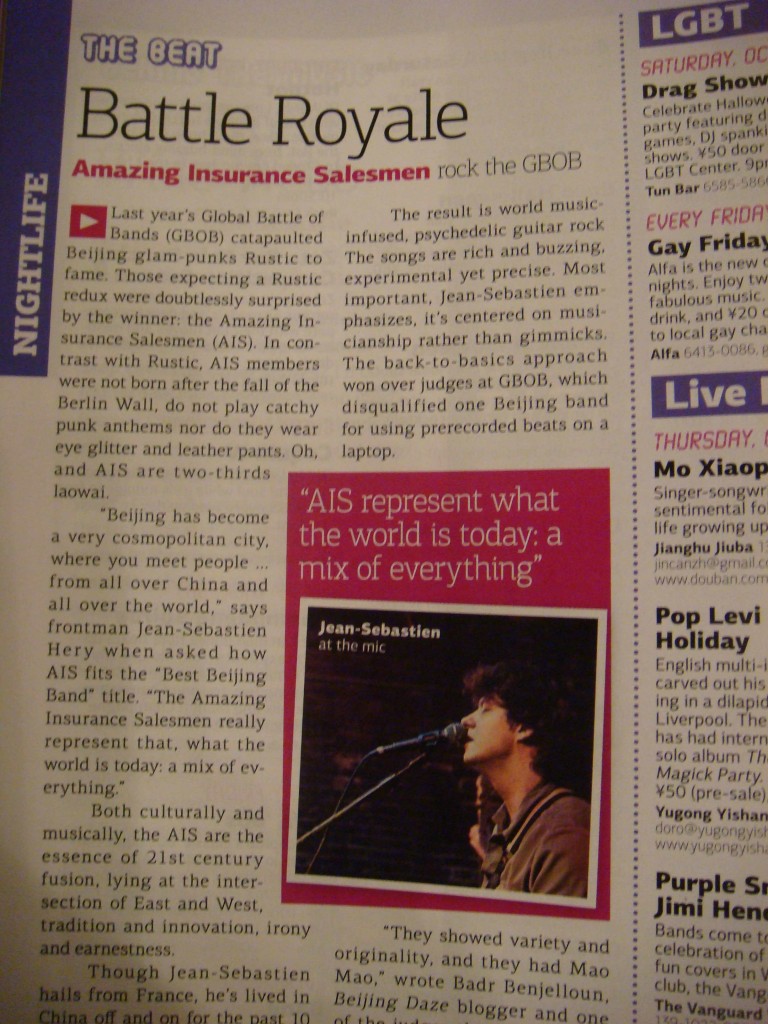