A theory of intelligence 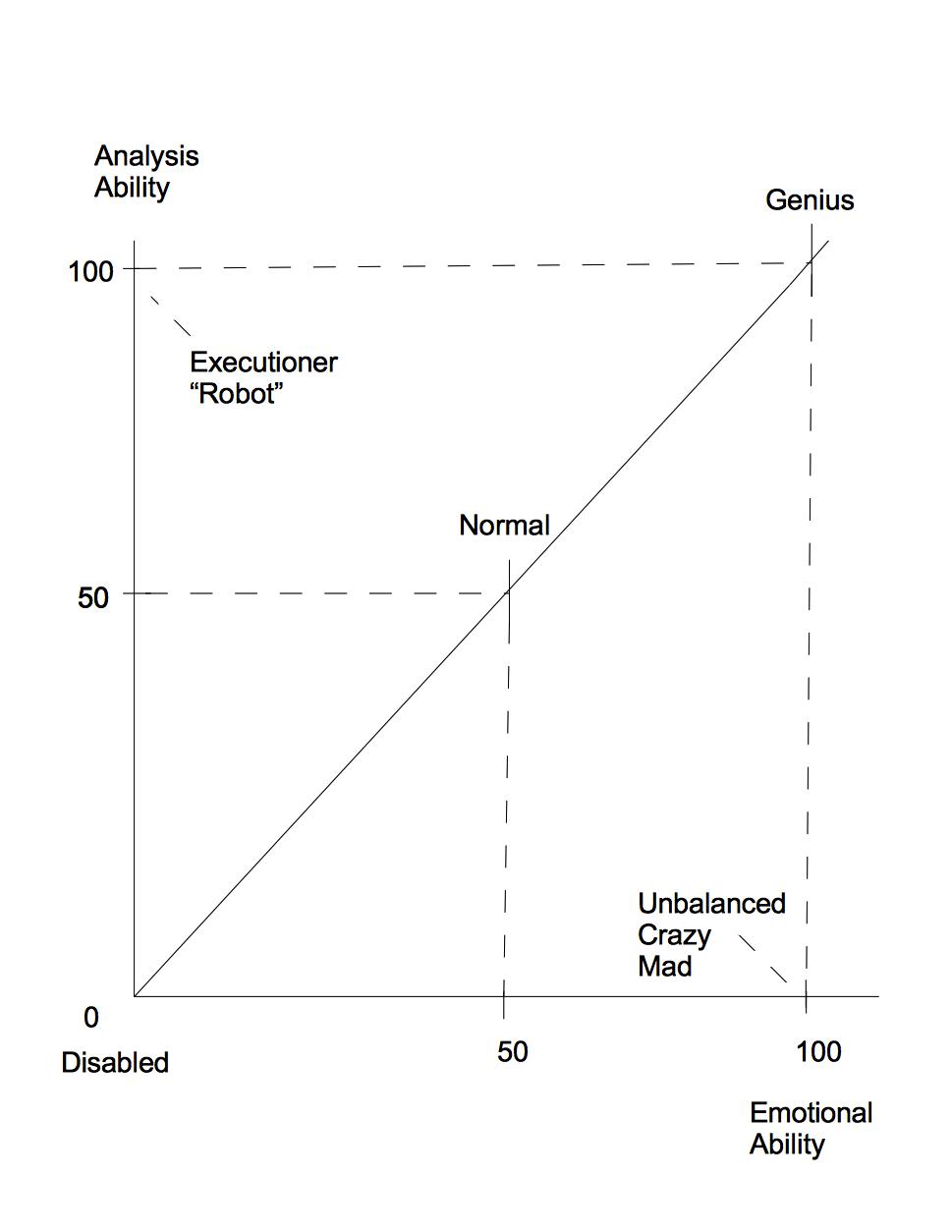 This is a concept album, an idea to mix music and philosophy.

Hear the music while reading this text here:

A theory of Intelligence:

“The idea for a theory of intelligence came to me a few years ago.

I wasn’t very good at school until I was 15 and decided to start to pay attention in class.

I was never good at mathematics, and it’s only when I went to a logistics school that I discovered why.

While learning about transport systems, production systems, warehouse management and supply chain I realized that mathematics and other things in life were systems created to translate and organize ideas projected into us by nature through our senses.

Here is the idea: our senses work as a gate, a link in between us and the outside world. By touching, smelling, seeing, tasting and earring, we send informations to our brain about what the outside world is. The conclusion for this would be that our understanding of reality is limited to our senses.

When people in the past created mathematics, music, philosophy, writing, and other concepts and technologies, they created interfaces in between our senses and reality, interfaces to help us quantify, measure, define, synthesize, express, analyze.

For example, music is an interface in between the sounds of nature and the human ear. By organizing the sounds in nature into 5, 7 or more notes our ancestors have created an interface to categorize, measure, name notes, and use those notes, reorganize them to create chords, melodies, rythms and  harmony.

Mathematics have helped us first, to understand basic things in nature, and then to understand things we couldn’t see, but only imagine, or extrapolate from what we can explore using our senses.”

“As I wrote earlier, our senses are the link between us and the outside world, they are the gate that transmit informations from the outside to the inside.

Once our senses have detected something, the information is transmitted first to our emotions.

Emotions are directly linked to our senses, as if there were wires or cables in between the senses and the emotions.

Emotions are linked to our brain, which is the place in our body where feelings are analyzed, digested, processed, to generate an answer to these informations.

I have divided intelligence into two abilities, an ability to feel, and an ability to analyze, I have called those two things “Analysis ability” and “Emotional ability”.

In this theory, those two abilities are linked to create one type or another type of intelligence.

There are several degrees of sensitivity that trigger and suggest different kinds of intelligence.

To have a wider view of this theory, check the graphic.”

“I came up with this graphic on a 36 hour train trip while I had nothing much to do but think.” 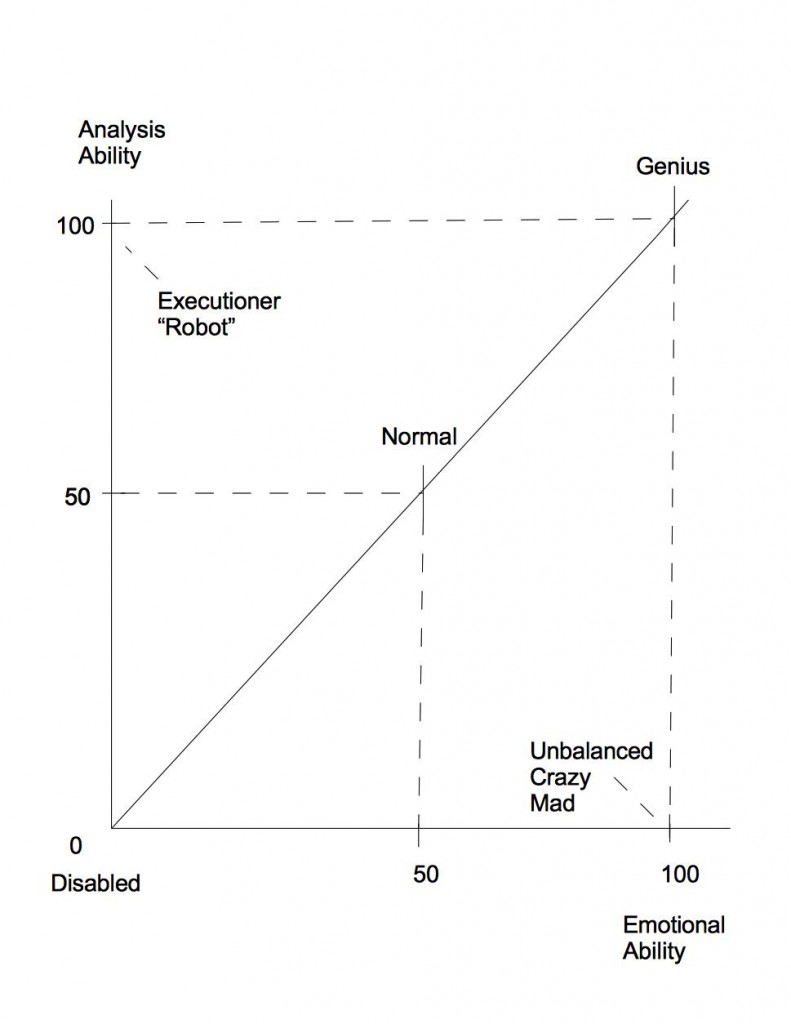 “The Graphic is divided in two.

The horizontal part of the graphic (x), represents something called “Emotional Ability”.

The Emotional Ability of a person is determined by his/her ability to feel one’s environment, other people’s feelings, intentions, and situations.

The vertical part of the graphic (y) represents something called “Analysis Ability”.

The Analysis Ability of a person is determined by his/her ability to process feelings, analyze feelings, give them a meaning.”

“Here are the main five categories of intelligence that can be determined using the graphic: 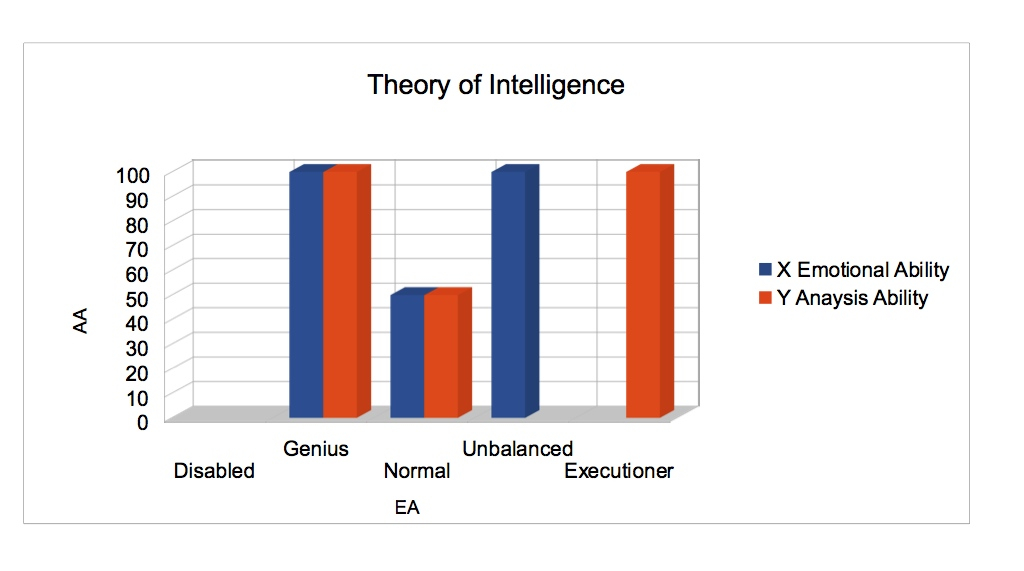 “Disabled”: inability to feel or analyze at all.

“Executioner”: perfect ability to analyze, but no or almost no ability to feel, like a “robot”, made to execute orders.

The purpose of this theory, how to use the theory:

“As I am not a scientist, I wouldn’t pretend to bring a real answer to what Intelligence is, but I saw that idea as a good opportunity to create an interesting artistic project, mixing philosophy and music.

I came up with this idea only through a process of observation, and didn’t use any past theories on Intelligence, theses ideas came through a very simple process.

I see the graphic as a help for people to know better who they are.

Anybody can place himself or herself on the graphic and determine what kind of intelligence he or she think one has, it is made as a tool to understand oneself better, a tool to help.

The “Disabled”, “Unbalanced”, and “Executioner” categories are extreme categories placed on the graphic as a reference. I believe most people will place themselves around the “normal” category. By placing oneself around the “normal” category, most people will be able to determine if they feel more than they analyze, or the contrary, analyze more than they feel.

Placing oneself on the graphic can help to see what direction can be taken in one’s life. For example, a person with more emotional ability than analytical ability could be good at art, but have trouble taking decisions. On the opposite, a person with more analysis ability than emotional ability could be good at mathematics, and good at taking decisions, but less good at art.

I think intelligence can evolve, progress or decay, according to the ability of a person to cultivate their analytical side, or emotional side, improve their knowledge, give themselves time to learn and grow.

This graphic only shows the intelligence of a person at some point in time. Everybody changes, we all evolve according to what we see, what we learn, what we experience, what we want.”

Category: A theory of Intelligence